Between Christmas and New Year's Eve I was in Hamburg at the 31th edition of the Chaos Communication Congress. This is a an annual four-day conference on technology, society and utopia.

I learnt about the conference at the EUHackathon in Brussels from Christopher, one of the participants. He told me about the geekness level of it. But what convinced me the most was the dating page of the website, filled with lots of nerdy references. Also, FOSDEM was going to overlap with my finals, and this seemed the best alternative.

I didn't manage to convince anybody else to come with me in Germany. So, after I found a plane that took me back home in time to get drunk with my friends for the New Year's Eve, I started searching for a place to sleep. After 4 canceled requests on Airbnb, Samy accepted my request. He was a really great host. For the luggage, I used this awesome checklist, that reminded me to take my towel, a tesla coil and enough underwear.

The Congress Center in Hamburg has been totally transformed. The place is fucking big and looks really futuristic. Over 2.000 attendees could fit the main conference room and, as I've heard, more than 10.000 people came in all 4 days.

Lots of hardware hackers and crypto-security people. As a software guy who hadn't used a soldering iron before, I felt a little out of my place. But I got used to it after my first day. The general advice I got was to go at the many assemblies (groups) and self-organized events, and leave the talks for watching at home.

Sometimes, I wanted to watch a talk live, but the room was already full. So, I just picked the laptop from your bag, opened up the streams page, and watched it with other people waiting at the door.

The SilkRoad is a old-school vacuum powered communication device used between floors.
Sometimes though, GCHQ, the British intelligence agency known for its collaboration with the NSA may see what packages are you trying to send.
The assembly room was the most beautiful lit.
There were also assemblies for lockpicking, making your own ring, Tor, Tails, Python and lots of other cool stuff.

Once you arrived in a room, before a presentation started, people had to do a defragmentation of themselves, moving to the center of the row, so that empty seats remained on the laterals and were filled by other people. This was funny in the first day, but started being a shitty thing in the last days.

My favorite talk was the projection of the Citizenfour documentary. The movie tells the story of Edward Snowden, how he communicated with Laura Poitras and Glenn Greenwald, and it convinced me that the NSA really has some problems. After the documentary, everybody applauded Laura for about 30 minutes and then she answered questions for 2 hours in a row, till 2 am.


My next favorite talk was the one about nuclear bombs. After watching this you ask youself how the fuck humanity has survived for such a long time.
The last one of my top 3 is about a Thunderbolt exploit that can infect a Macbook, close the hole it used to that, become undetected and can replicated between airgapped machines.

I heard somebody saying that we had more bandwidth available for the entire North Korea. Streaming every event live and keeping thousands of devices connected to the Internet is no easy achievement. Here is a screenshot from the dashboard I took on the last day: 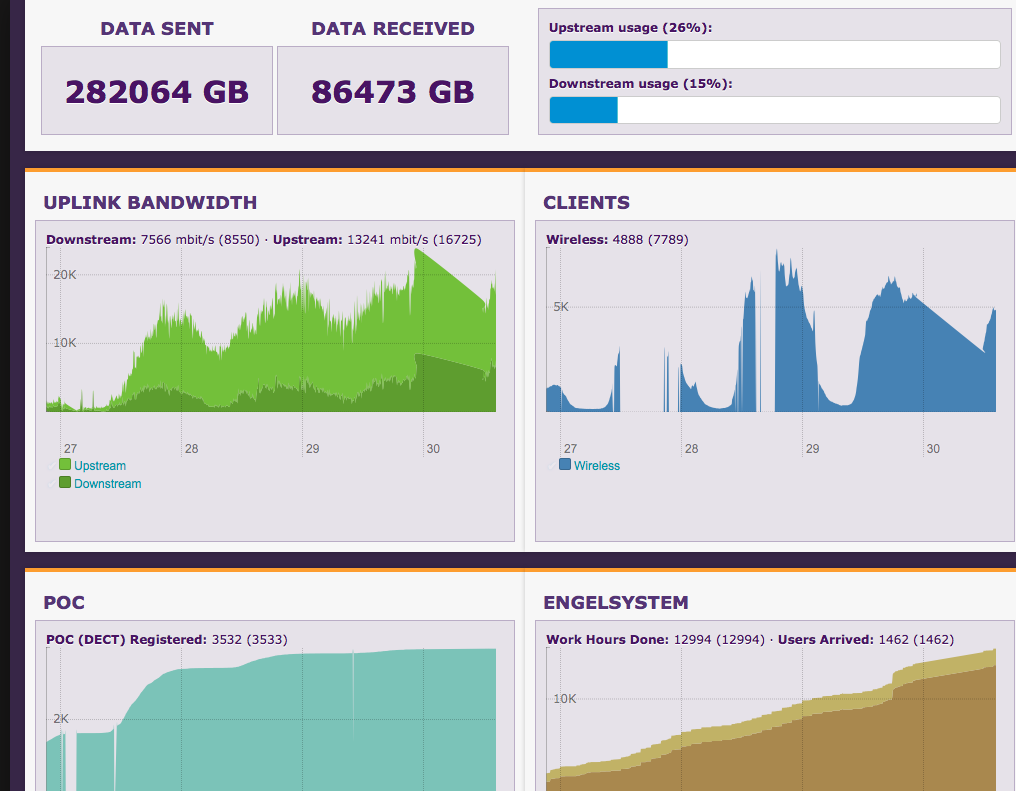 We also had our own private mobile network. I bought a SIM card, plugged it into my phone, selected from a web interface a 4 digit phone number and I could make pizza orders and talk to everybody around, thanks to Eventphone. More about the entire infrastructure in this talk:
There were also almost 2.000 volunteers who helped with the organization of the event.

On the third day, I accidentally met 3 other Romanians who were at the conference. On the last night we talked about politics, Maths, trigonometry, University, whistle blowing, the fine limit of stalking, liquid democracy, NSA, orthogonal polinomials and we went at the dubstep party. The next event will be a The Camp in August,