This week I am participating at the Millennium Youth Camp 2012 in Helsinki, organized by the Millennium Technology Academy. We are 30 teenagers, from all over the world, spending one week in a hotel near Helsinki, visiting Finland and learning about its culture, working on a project, meeting with top engineers, scientists, and we'll get a chance to talk to Linus Torvalds.

Long story short: I was accepted in the Information, Technology and Communication group, from 1,600 other applicants, after I wrote a project plan about online universities. For more about the application process and my crazy idea, read here.

We are 4 students from Romania: me, Tibi, Octavian and Monica. Unfortunately, neither of us is 18 years old, and the laws in our country prohibit us for traveling without being accompanied by an adult. Luckily, our parents only had to do some paper-work, because the airlines have a service for these kind of situations.

We had a pleasant experience in Amsterdam at our stopover. We were taken for one hour and a half to a place where other teens were playing or scrolling on their devices. In the plane to Helsinki, we met an Irish teacher, who was really funny, and we talked a lot during the flight.

A really dramatic thing happened at the arrival. Octavian kept saying all the the trip that he feels that he lost something, and we told him that he will find out in the Helsinki airport. Sadly, his luggage went to Spain and he received only a "primary necessities" kit.

We were the last ones to arrive at 8 pm in the camp. It's situated at 50km from Helsinki, near Poorvo. It feels like we are at the country-side and the view is awesome. After the greetings, we went straightly to the restaurant, where we found out that each day we have buffets and the food here is absolutely great. After dinner, we had a special program, in which firstly the guides presented us facts about the country:
Then we played some nice socialization games, like running for empty chairs, or jumping like bunnies. In addition, we learned to sing a Finish song, and had our first contest between the groups, in which we had to build a flying paper plane. Sadly, the lights went off after 11 pm :( 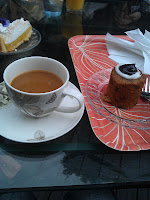 After the petite-dejeuner, I had an interview, because the ICT group is a little special this year: our discussions get filmed and we have to give some interviews for a project. So I spoke about my past, how I got here and my future plans.

Then, we took the bus to Poorvo, a little town where it is a chocolate factory. We also stopped for a traditional cake and some coffee. We spent all day being split up based on our groups. The other members of the ICT group are:
Next we went to Helsinki, where we took a boat. First, we visited Helsinki cruising, and the view was very nice, We also had food on the vessel.

Second, we went to Helsinki and went up to a tower where we saw the panorama of the city. We talked a lot about our education systems, customs and we shared a lot of information about our native countries. Finally, we went to a shop to buy souvenirs, and we ate some big ice-creams.

When we arrived home, we worked for about 2 hours on our project, and then we spent the rest of the evening talking. Also, helping us was Timo Sorsa from Nokia, and we spent a fair amount of time at the dinner talking about the current state of history company, and what does he think about the future of the Microsoft - Nokia partnership.

If there is  something that I hate, it's waking up early in the morning... but I have to do it anyway, and eat the breakfast... and I think I'm getting used to eating Finnish food (the brown bread is really tasty).

First, we went to University of Helsinki for the official opening of the camp. There were speeches by the dean of the Faculty of Sciences and from the organizer of the camp. After that there was a little presentation about symmetries and group theory, and one funny demo from a man who generated music using unconventional stuff like water.

Then we had an Amazing race of sciences: we were split up based on our groups, received a map of the campus and had to find checkpoints, where we were given some challenges, and when we passed 4 challenges, we finished the race. Unfortunately, we started with the Maths challenge, that proved a little more difficult, and we managed to take the 4th place from 5 teams. We went to our hotel, and on the road we learned that by participating in this camp we can now select to apply at the university, and we will get accepted (education is free in Finland).

After eating, we went to play some sports game in an indoor court. Both of our guides have played basketball: Tony is now a referee, and Laura is training a team of young girls. So, we played for about one hour a 4 vs 4 game.

We were a little tired after, but not so tired to refuse swimming in the pool and going to the sauna (the water was a little chili, but I managed to survive). The night ended with us singing in the lounge.

We talked about expansion economies, the unsustainable spending that people do at the Earth cannot support and also the massive challenges that wait in front of us teenagers.

In the lounge we then got demos of the new Lumia phones. The 31 megapixel phone is really awesome, and I took a photo of the old Nokia phones with the new Lumia 900.

After that, we ate at the cafeteria, where engineers where discussing very interesting things like algorithms or hardware designs.

We went then in a conference room, where we talked with the leader of the Nokia Mobile Mathematics, a woman that was very passionate about her work, and we got very much information about how it's like working in the social corporate environment.

The day finished with the international gala, where every participants from the 20 countries had to present a special moment. We are 4 Romanians, so we danced Brasoveanca, sung Dragostea din Tei and gave Martisoare.

Today we worked a lot. I was tired, so I missed the breakfast and I went directly to the meeting were we discussed our project poster. After 2 hours, we went to eat and then we suited up for the Millennium Gala.

We arrived at the National Opera on time, and the people were very stylish. The gala started with some kind of creepy music, things went normal. The big prize was split between Linus Torvalds and Shinya Yamanaka, for their groundbreaking innovations in open-source development and in medical stem cells.

Finally, we finished at 1am the work for our poster, and went to sleep fully tired.

Early in the morning, we departed to Aalto University, where we had the one chance in a lifetime to pose questions to Linus Torvalds and Shinya Yamanaka.

I got to ask him about what should young developers concentrate to code on. His response was to start with small things, that we care about.

You can find a very well detailed article about the meeting on the MyScience blog.

The evening was reserved for project working, sauna, playing games in the pool and some more guitar jamming.

This is the day for which we have been preparing: presenting the projects in front of our guides, our advisors and a big audience.

We travelled in the morning to Heureka science centre, where we were left to visit it. There were exhibitions of planets, different physics phenomenons or climate change but my favorite part was seeing rats playing basketball.

Finally, we presented our projects, but before, Val had a great speech:

Lastly, here is our poster and slide decks of the presentation.

In the evening, we were all very sad because everyone had to depart to his country. To make us forget about the farewell. The guides offered us some cute prizes. I got a Bad Piggy from Angry Birds and the title of "dearest perfectionist", because on that day I spent every minute I could on tweaking the design of the presentation.