InfoEducatie is a national IT contest, which takes place every year at Galaciuc, Vrancea. It is a place where high-school hackers gather, to present their projects to juries from different universities or companies (Google, Amazon)

PeopleSeparator - it is a web application, which groups people, based on their social profile. For the moment it only uses the common friends and common likes from Facebook to calculate how close can a human be to you.

The idea came when I was reading The Facebook Effect by David Kirkpatrick, and saw that Mark Zuckerberg saw Facebook first as an utility for the world. Like a demo, I created a website for an IT camp (TechFriendCamp), and implemented the separator to it. I'll write a full detailed article about it, after I finish this series about my holiday.

Well, I worked till 8 a.m. in the morning, and the contest was at 9 a.m. I tried to deploy the app at 8:30, but... it didn't work (I didn't have some dependencies installed). So I took my desktop computer to the presentation of the project.

All things were good, I had my "portable" tower with me, but when I had to present I saw that I didn't have the correct video jack: my nVidia video card has 2 DVI exists, where as the projector had an VGA entrance... so I took a taxi home, and brought the adaptor. But, the jury (made out of teachers) wasn't even paying attention to my project. So, I took 4th place and I didn't qualify (at a difference of 0,25 points of 10).

But I went to the national phase, because the guy on the 3rd place retired. So, after a 12-hour journey by train, with a stop in Bucharest, me, Ionut and Bogdan arrive in Focsani. Then, we took a bus, because Galaciuc is situated in a remote forest. 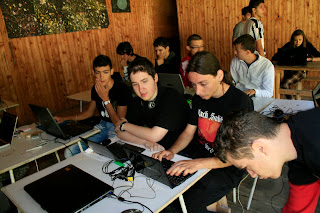 There, all the contestants were coding. We were allowed to fine-tune our apps for one day. So everybody was debugging, or adding extra-lines to their apps, in the pavilion: it was the only place were we had internet... at about 2 KB/s (when it was not windy). And the other problem were the power cords... there were not enough holes to plug them in... so if you ever come to Galaciuc, an extension cord is a must. 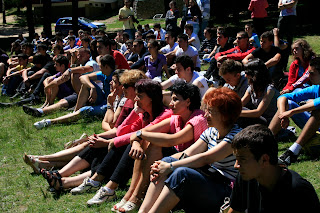 But the general atmosphere is very cool: 100 geeks, every one of them with a laptop, coding in different languages and talking about the same things. We even had  a quiz night, when we stayed until 3 a.m. and answered different logic puzzles played pantomime.

All day long we had some excellent workshops, some of the best were (all in Romanian): 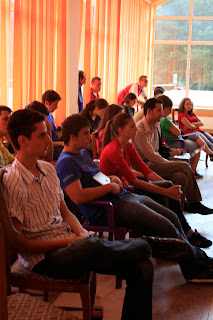 Not much to say here... I left the most important thing to code, in the last day: "the algorithm"... so I didn't manage to finish in time, and, well, the jury didn't like it. So I got the 11th place (not bad for my first contest)... you can see the rankings here.

The experience of the contest is wonderful... it's like a Yahoo! Open Hack, but for 7 days. So I want to thank again the organisers for making this camp possible... and I better get working on the project for the next year :-).