The National Romanian Scout Jamboree took place between 11 and 21 August, in Salistea, Sibiu. Almost 1.300 scouts participated, and I was one of the lucky persons to spend 10 memorable days, with my patrol from our local centre in Valcea. 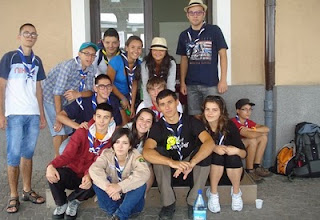 We arrived at Saliste by train. There, we were picked up and went straight to the camp, at about 2 kilometres. Then we picked up our IDs and our neckerchiefs, and we were prepared for action.
The camp was divided in subcamps, based on the old regions in Romania. We, with our friends from the local centres in Bacau, Radauti, Red-Bucharest and our friends from Israel were assigned to represent Dobrogea (the seaside region in Romania). 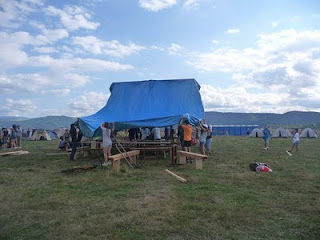 The wake up was at 7 a.m., followed by refreshing exercises at 7:30. Then at 8 a.m. we had breakfast, and the departure for the activities was at 8:30, with the lunch in our backpacks. We then, arrived from the activities at about 5-6 pm, ate our supper, then went to different activities. The time when we went to sleep, was mandatory for all, but a little early: only 11 pm :-).
I could say it was a reasonably schedule. But, we teenagers in the summer, go to sleep at about 2 am, and wake up at 11-12 am. This was a shock, and I was lucky to have my friends, Edy and Flaviu, which woke me up with yelling and fights :)).

First day of action: we had to build a catapult, a bridge, a hammock, a boat, and we had to ignite fire with flint. But first, the leaders remainded us the basics of nodes and joints, and gave us some little secrets about the projects.

We climbed two climbing walls, had a GPS and a compass track, went through an army track with wheels and web, climbed vertically with the force of our hands (on caving equipment), and finally went on the 120m flying fox. 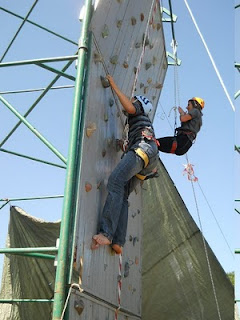 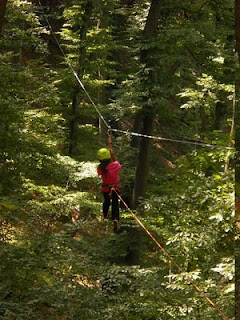 It was the day of competition... the day when we played the games of Zalmoxis...
It's not how you imagine it... all the games where very funny: we had "the throwing boots" trial, I had to guide my blinded team through a terrain of mines, we had to roll over like logs, be a worm together, make a safety net for a dropping egg. It was a tireless day, but, the next day would be the most difficult.

The objective: to reach peak Cindrel at 2244m, from 800m, in 2 days.
The whole hike had 55.6 km. If you want the map, you can download this file and open it in Google Earth.
It was extremely hard... I mean carrying a backpack of 20 kgs, for 10 hours... then helping your exhausted friends, then sleeping 6 hours, and another 10 hours of hiking... it's exhausting. But the energy you take, and the pride that you've beat the mountain is extraordinary.

Well, the next day we should have gone to Saliste, and do stuff that would have helped the community... but we were so tired, that we slept all day long.

So we recharged our batteries, and went to Sibiu to explore it. The citadel was in danger, so we, The Bell Ringers, need to complete The Great Quest, because We The Almightys, would save it from destruction. So we run in the city, gathering clues, and solving quests. It was really fun to play scout games, in the middle of the city :-).

In the last day of RoJam, we had another fair. This one was based on 3 principals: social, economic and ecology. We had to finish, as many workshops as possible. So, we played an economic game, like monopoly, but we were countries and we had to help each other grow. Then, we built a solar oven, and cooked a chocolate in it. The last task was the most difficult: we had to pass over a rope, without touching it, and all of us (about 20) were holding our hands together, and we couldn't let go of them. We tried to pass it for about an hour, and finally managed to go over it. At the end, we were so happy and couldn't believe that we did something that at first was impossible.

All this ended, how it begun: with fireworks, and a message that we, all scouts, were part of history.
We learn scouting by doing, by playing, by working in teams, by making friends, and I'm proud I'm a scout.

PSes:
If I've forgot / missed /  mistaken something, or if you've liked this article, please share your opinion in the comments. Thanks !