This weekend I am going to be in Dublin, Ireland to take part in the Coolest Projects contest. It is organized by CoderDojo, a worldwide volunteer movement, where kids come in one of the 431 dojos from 44 countries and are taught computer programming.

I learn first about CoderDojo in the 2nd day of the Google Tango Hackathon hackathon. About 40 kids, ages between 7-17, were in a room, scrambling and coding. I was fascinated about the uproar that was going on. In a part of the room kids were helping other kids in Scratch. In another part Radu was showing them the winners from last year’s competition. I remained with a thought that something magical happens in that big room each weekend.
But CoderDojo is not only in Timisoara. There are 431 dojos in 44 countries, where each weekend kids come and teach themselves how to code.

Is the contest organized each year for kids showing off their projects. In the first year they had about 20 registered projects, in the second 60 and this year they had to cap at around 240 projects. The categories are projects in Scratch, web, apps, HTML games, advanced languages, enterprise or others.

The road and the team

It’s 5am, I’m in Gara de Nord Bucharest and boarding towards Timisoara. It will be an 8 hour journey. After that I’m going to Budapest by bus with the rest of the group. Finally we’re taking the plane to Dublin.

We are 6 adults and 15 kids. Their level of energy is so damn high and they never stop talking and doing stuff.

In the morning we went to Google to visit their office. We hopped on a double-decker and met Antonia Caraveteanu, a Google sales employee who showed us the awesome buildings.

We then went to University of Dublin City in The Helix, which is like a very big performance space.

Juries are currently going through all the projects. The contestants are a little nervous, but they should calm down because it will take about 4 hours to finish everything. The jury is assessing the coolness of the idea, the complexity of the project, the presentation, design and usability.

PinBands formed by Teodora, Silvia, Eva, Sonia and Vlad have made a web app that connects people, artists and venues. It is oriented on the artists, helping them find out other band members and discovering places where they can sing. 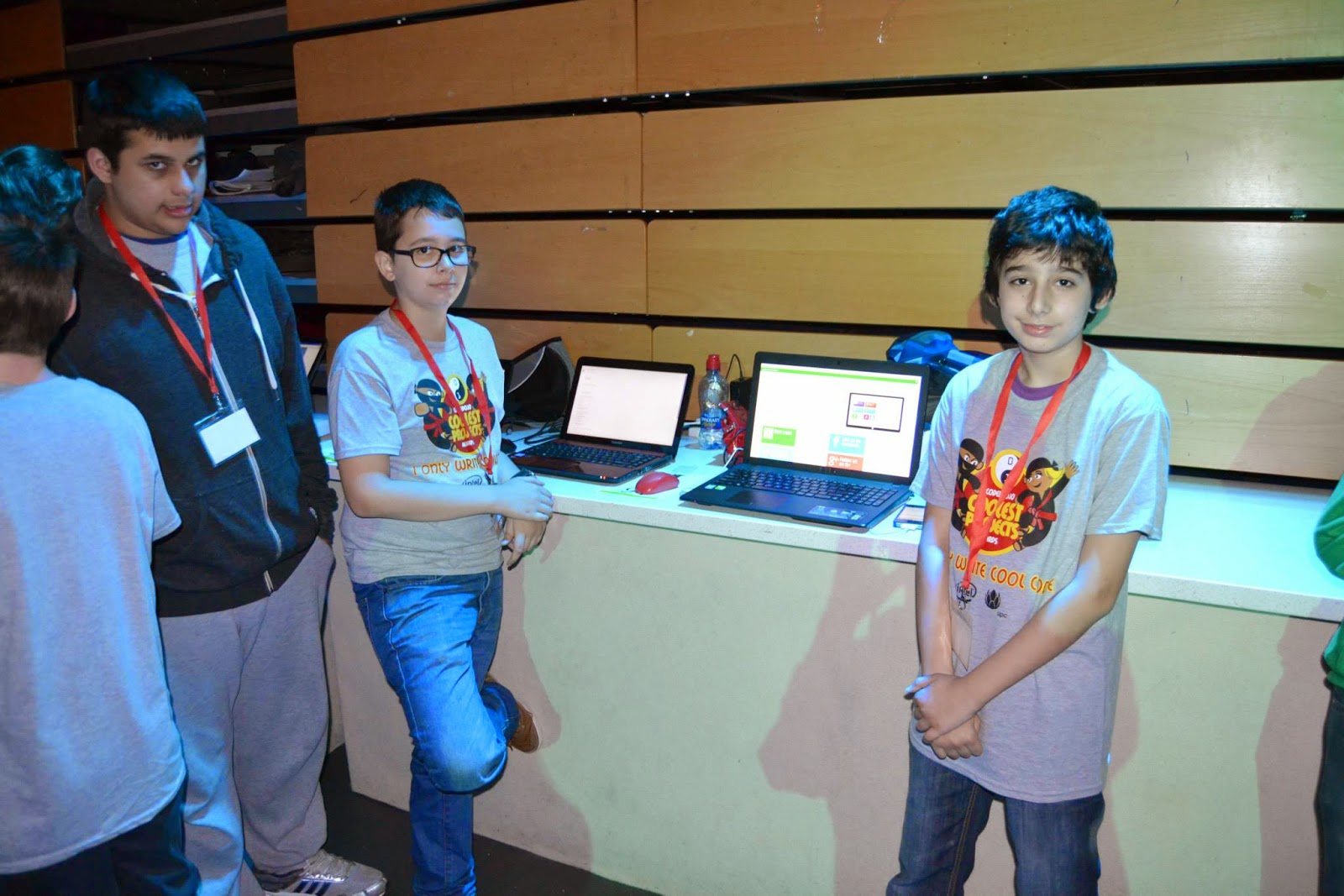 Alex from Oradea made an Android app named ScanTheBadge. If you are the organizer of an event, let's say CoderDojo, you have to maintain a list of participants. With this app you scan the QR code of a person's badge and it autocompletes a spreadsheet with their details. After that you can open the list of participants. To build this app he used a cool tool for beginners named AppInventor. 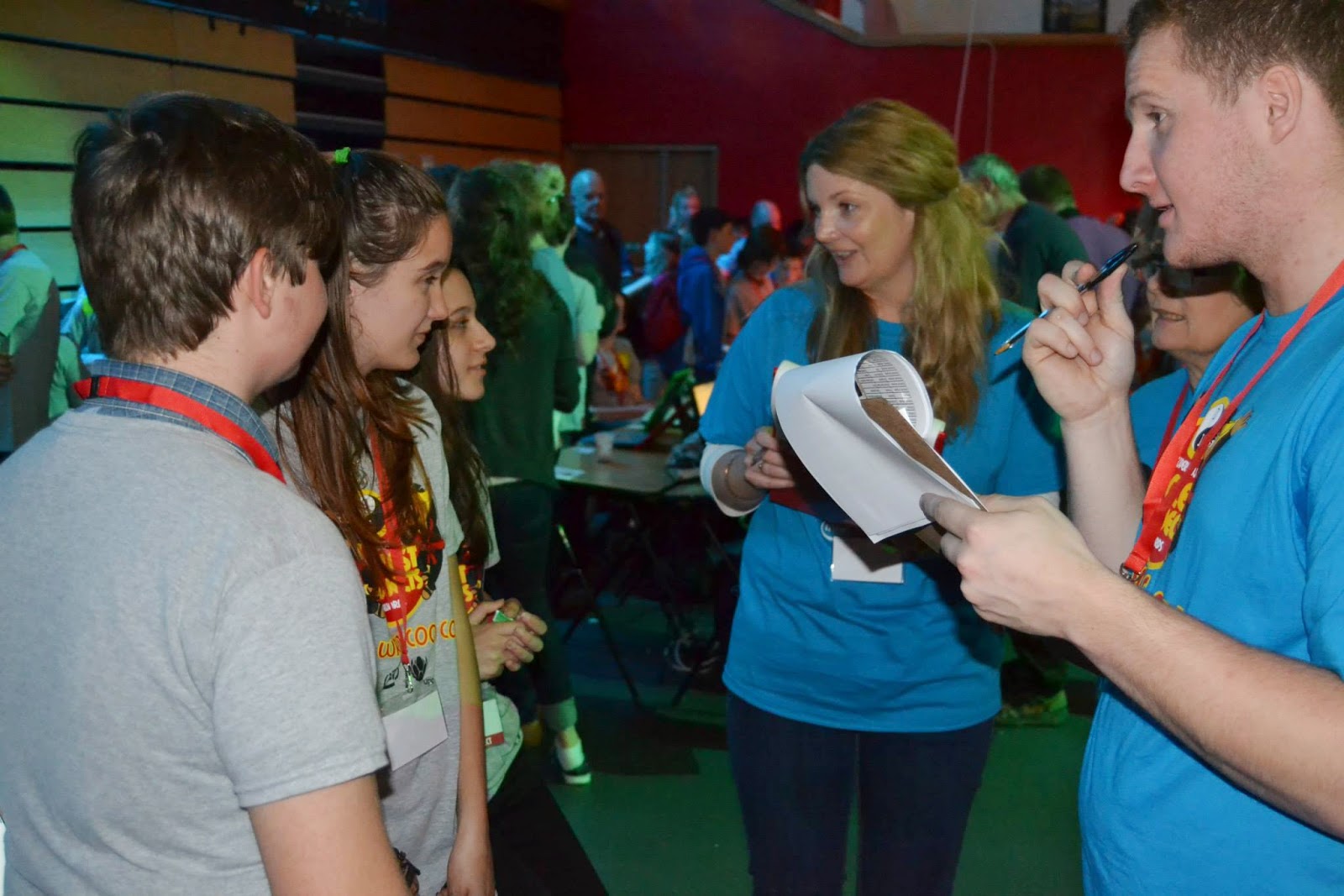 Radu created Idea Generator for people that do not know what to do. It is a PC Java app, that asks you 16 questions about your preferences and gives you a list of things to do so that you life will be happier after. He said that his secret sauce is the formula he uses to determine what ideas you should receive and that he spent nights tweaking it. ;)

Adrian and Raul participated in the Advanced Languages category with their game Clash of Empires. This category, despite it's name, is not for creating new programming languages, but for more complex apps. They made a turn-based strategy game in Java for PCs and really wrote some complex UI code using Java Swing. They were most proud of the implementation of the flood-fill algorithm in their game for assessing what moves you can do next. They also spent a lot of time transforming the sprites from opengameart.org into something that looked awesome in the game. 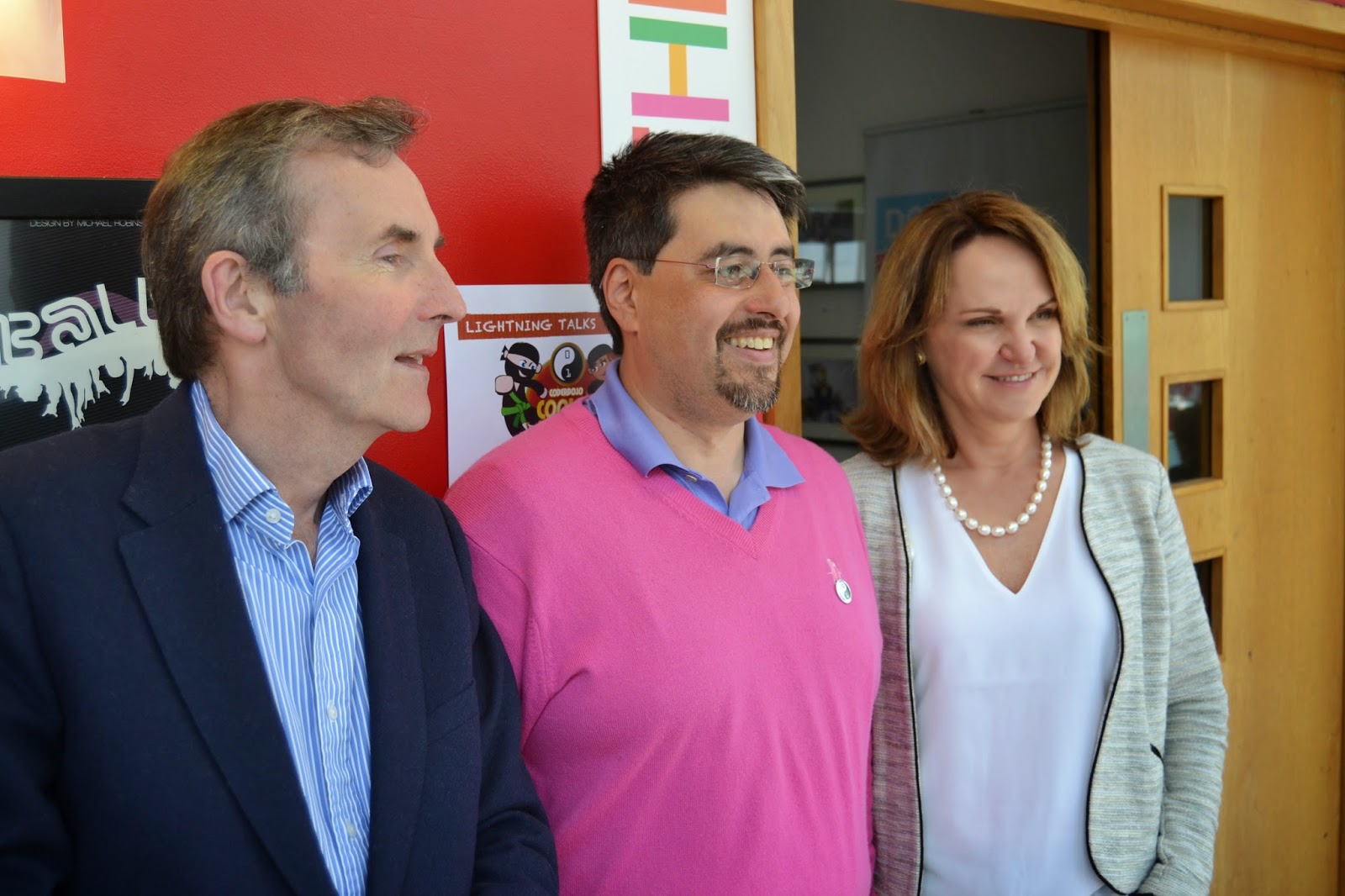 In the left and the right of the pictures are the parents of the founder of CoderDojo, James Whelton. In the middle is Bill Liao, the co-founder and serial entrepreneur, well known in Romania for his special guest participation at Startup Weekend Timisoara and How to Web conferences.

After kids presented their stuff, they went There are hacks, drones, a 3D printer and even an Oculus Rift. We're now waiting for the final ceremony.

We won a runner-up prize in the Advanced Languages category.

We got early in the morning to arrive again at DCU. Today it's the Launchpad event, were the kids will learn the business side of the things.

After that we split up in 2 parts: half of us went to the St. Patrick's Cathedral and the other half went to a Comic's Store and a big book shop.


Around 1:40, Diana Măcău the head organizer of CoderDojo Timișoara talks about how she feels about this event. The list of all the winners is available here.