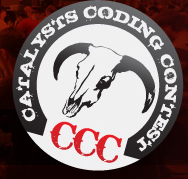 This weekend I did a little tour of the country. It started Friday, when I went to the Catalysts Coding Contest in Cluj, followed by the Amazon TechO(n) conference in Iași, and finalized with the Romanian International University Fair in Bucharest.

I got a mail 2 weeks ago from my computer science teacher in which she presented me this contest. I saw last year some discussions about it on the InfoArena forum, so I decided to participate. I was surprised to learn that 2 other friends, Vlad and Vali, have relatives in Cluj, so we made a team.

We went by bus and arrived early in the morning. After a bit of wondering in a mall, we entered in the Faculty of Economical Sciences, the location of the contest. I found that another track of the contest was held in Vienna also.

The problems were a type of "capture the flag", with 7 levels. We had a little obstacle, because my other 2 teammates hadn't coded in Python before, and it would have been a pain in the ass to program a strings problem in C++. We managed to get the 12th place, sending the 3rd level during the last 5 minutes of the time allowed. The code is very messy, but it works.

At the ending ceremony, the organizers were very nice and gave us pizza and drinks. After the contest, they've posted an interesting infographic presenting the results and the languages used.

A slightly not fun thing happened to me when I was sleeping in the Cluj-Iasi train: a cucumber fell on my head. I woke up, just to see a man lifting sacks of cucumbers on the luggage space just above my head.

It's always a pleasure to be in Iasi. I was invited to participate at this conference during the InfoEducatie contest. Sadly, no other invited contestant was present.

But that didn't stop me from meeting old friends from the jury like Vlad, Mitza, Bogdan or Vali who now runs his own startup SimplySocial. Palas mall was chosen as the location of the conference, and I tell ya, it has the most beautiful park in Romania. The attendance was like 400 people I think (+- 100, cuz I'm really bad at estimations)

Update: here are the slides

The first speaker was Colin Bodell, who talked about "scratching our own itch". He exposed how Amazon Web Services first appeared, that every big decision they take is based on business facts and the Kindle is viewed as a toaster that gets it's job done.

Next was Jeff Barr, that "evangelized" the whole AWS platform. The presentation was boring, till the Q&A when:

Next, some agile scrum management tips with Peter Commons. Sprint, burn down chart, product backlog, all terms were well explained. Sadly, I know the theory but I haven't worked in a team to see if these things do really work, so pretty useless for an algorithm geek like me.

The final American speaker was Jesper Johansson with his "Mythical Amazon Hacker" presentation. He captivated the public with a description of the 10 false beliefs over security. He sprayed pixie security dust over us, ran in the whole conference room, climbed up a chair and made us repeat that we are "security experts" and "the sky will faaaall". From real world examples to really good jokes, this was by far the best presentation of the day.

After the lunch break, where we enjoyed some healthy and tasty Subway sandwiches, the Romanians were up next for presentations in two different tracks. I went first to was Florin Manolache and his algorithms for data streams. His focus was on space saving algorithms and I was very surprised to see some problems that have appeared on the InfoArena blog and I tried to solve in his presentation.

Next up was Aurelian Tutuianu, with a practical survey on hash tables. I was full blown right away by his memorial keynote of Mihai Patrascu, one of the the greatest computer scientist of this century, who passed out this summer at the age of 29. After the memorial moment, he started talking about some not well known types of hash tables, like Cuckoo Hashing.

The final presentation was held up by Igor Spac, who shared some tips on how to protect our fleet of servers from DDoS attacks. He concentrated on explaining the token bucket algorithm in the case of a malicious attacker who makes a lot of requests on our distributed hosting servers.

After the conference we received a ticket for a free beer and meal at a restaurant in the garden of the mall. By luck, I saw Cosmin Lehene, a big data coder at Adobe that I met at our school visit this summer. We started talking about the whole day and different geek stuff. Near him was Andrei Savu, who runs a startup with a pretty neat and very difficult idea for the cloud (Hadoop stuff). I started discussing with him and his girlfriend about future plans, coding stuff and Iași in general. In the end, I had to go to the train station, and travel once again to Bucharest.

Was pretty boring... nonetheless, I wasn't there to have fun, but to discuss about my strategy for the college application with the Fulbright Romania folks. They were very excited to talk about it and I confirmed my views about American universities (can't disclose them now, I have to get there to be 100% sure they are true). The biggest advice was to apply to a lot of universities, even Liberal Arts Colleges if they seem to have a good CS department.

My trip ended with visiting some friends in the dorms of University "Politehnica" of Bucharest. The atmosphere was very relaxed, with students having a massive amount of excess food and complaining about their Maths teacher.

I cannot publish this blog post without a little rant about the public railroad company in Romania ("CFR Călători"). I think that more than half of passengers were traveling without tickets, bribing the conductor. I hope the little scandal in the press now will severely lower this number.

But this is a minor thing, in comparison with the poverty I saw in every station. Old people carrying 20 kgs of luggage in Cluj, 20 humans sleeping in the Iasi station overnight or gypsy kids begging for food in Bucharest, this is the scene you get to see. It reminded me that juggling with bytes of information is almost nothing...