InfoEducatie is a national contest high-school programming projects that is held every year in the Galaciuc camp, near Focsani. This year in August, almost 150 students participated in the apps, web, robots, educational and multimedia sections.

Inspired by Vivi's idea of a playlist from your Facebook friends, I tried to build upon this idea a web app that may one day be a full fledged online player. I arrived in about 4 nights at a not so functional Rails prototype, but I had something rough, that I thought I could finish there.

We arrived Monday at 17:00, a little late because one of our team members returned from the seaside on that day. When we arrived, we learned that we have to present the last because the internal registrations deadline was over and the lists were made.

A little lucky I may say, because I had more time to work, but also presenting the last the jury may be bored I thought. The entire day I stayed at the presentations and worked the whole night for my app.

The atmosphere was geeky as usual: people caring laptops to the nearest power source, trying to find the best position to catch wireless internet (which btw was very good this year) or debating about why Windows sucks and Linux rullz.

I don't remember much. Just staying at the presentations, and coding at my app.

In the evening mr. Sabin Buraga, the head of the jury, held another of his famously fun and useful presentations, about browsers.

Architecture of the Web browser from Sabin Buraga

Thinking back, I made 2 very crucial mistakes before my presentation. First, I didn't sleep for 48 hours, and appeared a little like a loner getting out his cubicle, and protecting himself from the light.

Second, I used Heroku for deployment, and didn't test it sufficiently. I "learned" during the presentation, that my Facebook API requests where taking a lot of time, and Heroku has a limit of 5 seconds per request.

In the evening, mr Sabin Buraga held another entertaining presentation about parsing information on websites. At the Amazon presentation, with a little luck, I won an invitation to a really badass conference that will be held in Iasi this autumn

But, the results where then posted, and I went to bed a little disappointed that I only got the 12th place, worser than last year.

InfoEducatie consists of 2 rounds: in the first one everyone presents his project in front of the jury, and in the second one, where only the first 5 participants from each category compete, you have to code a project in 24 hours with a specific team. Lonely hackers can also bring another one who can help them, but they can only use a machine.

I was really surprised when in the morning, Vlad Velici came and proposed me to be team in the open. But nonetheless I accepted, because we both coded our project in Rails and I thought I could help him.

However, nobody can guess about what is the open, and this year it was a big surprise:

We went into the forest for brainstorming, but I already had an idea: a water pipe game. After a bit of "let's try and find another stupid idea", this was the best we got. We settled on making the engine in pure Javascript and, if we have time, make it a co-operational multiplayer game with the help of NodeJs.

The next 24 hours were like this: Vlad coded something, I debugged, then we went to the next feature. After completing this cycle for a few times (and squashed some really ugly bugs) we had a quite functional game that could be played by 5-6 players.

During the open, we had a surprise from Google. An engineer came with one of their really cool street view cars. Unfortunately, he couldn't answer all our questions and was a little "quiet" about the technology they used.

We got a little sleep before the presentation, and I was very pleased that I helped Vlad to get from the 5th place before the open, to 3rd.

The web jury was kindly enough to held an open talk session where I learned a very valuable thing: it's not really about the new technologies you use or the idea you have. Ultimately, it's about the work you put on into your project.

And almost forgot Bogdan Gaza's very important advice: Don't get hired during your university. Try to do only one thing, and try your best.

In the end, I took my guitar from the room and jammed it till late in the night, with the help of Vlad Stoian, Marius, Vlad Velici, Sabin and all the other who love music. 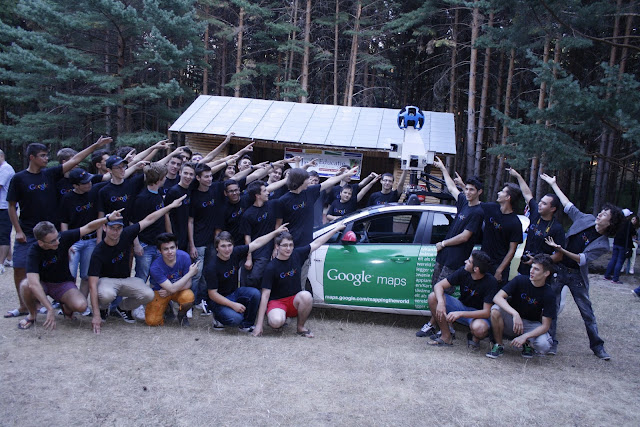