GrepIT Botosani 2011, was the final contest of the summer, and took place between 28 August and 2 September. There were 2 categories: developers (split in apps and web) and media (split into stop motion and movies). It was a funny experience, where I felt like the organizers were also contestants. It was also a lesson for me, on how to organize an event.

I learned about the contest at InfoEducatie: Andrei Avadanei told me about it. Then, with Ionut Budisteanu, we took the train to Botosani. All the travel, we met other contestants, and chatted with the Twitter Channel, which said us a good joke: 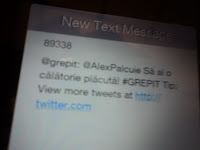 What is the formula for compressed oxygen ?!?

I learned later that the chief, Doru Stefanescu was in charge with making us feeling happy. We were spammed each evening with messages on the phones :-). The location was really great: The Memorial House of Mihai Eminescu, which had some pretty nice and cozy lodges. Also the food was great: each morning we got Nutella and milk with Nesquick and each meal we had pancakes. Also we had ID badges with QR codes: if you would have wanted to learn someone's phone number or email, you directly scanned his badge.

Each night was for "networking", at which we played different games. We played a team game, were we had to move a ping-pong ball from a bowl to another with our breath, we ran in pairs, each member tied at one leg, a race in potato bags and other crazy stuff. Then played Mafia, and it was a pretty long game. Also, after the games, we gathered to sing and play the guitar, with the chords and lyrics on the projector, and 2-3 guitars in the background. Thanks Cristi and Vlad for preparing the nights.

But there was also a contest, splitted in two sections: web and apps. The biggest prize: an Asus Transformer :-O. Congrats Marius, but I liked the scoring style: 25% of the score you got from the other participants, and 75% from the jury. I managed to finish the algorithm for my app, in exactly that morning, and it really worked :-). And for my 2nd pitch, I think I have a long road till when I will be at 5% of Steve Jobs... but I have time.

The best things was a round table, were we all sat and talked about mobile platforms: we discussed every little bit from the users point of view of iOS, to the difficulties of a developer on Windows Phone platform, and we compared which should be OS to start with mobile app developing.
Also, we had a workshop with a guy from uCoz, and Adi Mironescu presented us a pretty neat early-alpha secret project :-). And Mihai Agape, presented us some pretty neat robotics.
Also, on the last day, we had an whole day workshop which "got us out of our comfortable places" (Andrei used that expression). We had to do short film, where we presented our app. Thanks Delia Zosin, for helping me, even though I was a little grumpy (the app guys got to code an OpenGL project in Python :( ).

Even though this article comes at about 3 months after the contest, I hope I remembered all the events. All in all, it was a very good contest, and next year, I won't miss it for sure.

PS: Defcamp article is coming, then I will present some projects.